Not Cheap But Excellent Value

What joy to write a restaurant review with hardly a “but” or “if only” in sight. We headed to the recent arrival on Wandsworth’s nationally famous restaurant row, Bellevue Road, to see what the latest addition to The Good Earth family of restaurants and takeaways (The Good Earth Expresses) has to offer.

Slow and steady clearly has been the motto of this company when it comes to opening its restaurants. The first was in Esher 33 years ago; this is only its fourth, plus a cluster of takeouts. 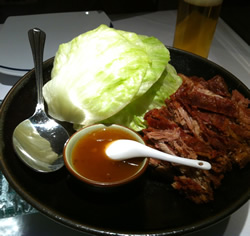 Invited by the restaurant for dinner, it was tempting to select the set menu, at £38.80 per person, which is almost a tasting menu of 10 dishes plus tea or coffee. But, instead, we thought we would stick to some dishes we like and know well, to see what was made of them by The Good Earth, plus a few new ones.

The house wines are Chilean, a Javiera Chardonnay or Merlot at £20, but Jasmine tea is also available at £2.60 per person. We also had a (stylishly shaped, yes, it matters) bottle of still water, Norwegian Voss, for £4. Jugs of tap water are available and if you really concentrate you can just taste the difference between London and Norway (Norway wins).

To start we selected Lettuce Wrapped Crispy Lamb served with plum sauce (£9.80) and Chiu Yim Ribs tossed in peppercorns and spiced salt (£8.80). I’ve previously enjoyed diced pork that you roll up in iceberg lettuce leaves and this was a spectacular variation. The lamb, crisped and shredded in the manner of Chinese crispy duck, was fully of lovely lamby flavour and the plum sauce was light, zingy and fresh, so ideal with lamb, and nothing like the solid brown gloop usually labelled as plum sauce.

The fall-off-the bone ribs were prepared as you might popular salt and pepper squid (also on the menu at £7.40) and were served in a nice little heap with slivers of chilli and spring onion and pronounced “delicious” and “I win” by my husband (a menu ordering game we’ve played all our married life). Service, incidentally, was impeccable and the hot towels on hand through all this finger food discreetly replaced three times!

With 20 other starters to choose from including soups and aromatic duck it would be great to go as a group of four or six so you can share more.

Next we opted for Sizzling Chicken with Black Beans, Hunan Chilli Lamb in a Paper Pot with cumin and special preserved chilli (both dishes £14.80), Pak Choy with garlic and old favourite Singapore Rice Noodles (both £9.80).

Now while the chicken dish sounded the more ordinary it was far from it and even the waiter was moved to say “yum” as the fragrant steam wafted into his face from its little black pot. And yum it was indeed. Chicken that tasted of chicken (so easily swamped by added sauces), crisp peppers, slices of onion and I think I could separate out at least three of the famous “five spices” in a delicious black bean sauce.

The lamb was another winner, if not quite as expected. This time the tender slices of meat were far more Chinese in taste and texture (soft and chopstick friendly) than gambolling English and bubblingly served in a fluted paper bowl that looked and sounded nice but didn’t seem to be required by the recipe.

Topped with oyster mushrooms, the taste was great but the dish didn’t really warrant its one chilli “spicy” rating, for the little dices of red chilli had not exuded their modest heat to the rest of the dish. Mind you as we found the one-chillied Singapore rice noodles, while spicier than the lamb, mouth warming rather than sizzling, maybe it’s our taste buds. What’s tingly to one person requires a fire extinguisher for another.

Tucked in with the lamb were some vegetable discs that I couldn’t identify. They looked like water chestnuts but floppy and without the crunch and had a flavour almost crossing potato and apple. What was this magical ingredient? “Chow Chow” said our waiter, adding “vegetable not dog” heading off the bad joke he’s clearly heard too often. Then he helpfully produced a picture on his phone revealing those green fruits that look a bit like a bulbous avocado.

The Pak Choi, my favourite flavoursome oriental greens, fitted in with the other dishes perfectly.

Read just about any novel set in China and beans as a sweet dish will feature somewhere. Well maybe not in Pearl S. Buck’s Pulitzer winning book The Good Earth, which is mostly about famine (ironic in this context) but in more modern settings. So, despite having eaten to a standstill, when we were offered Crepe Good Earth (£6.80) with “red bean paste” filling it just had to be tried. We were on a roll after Chow Chow.

And it was very good. If you don’t know what to expect, the red of the filling is a bit deceptive because it makes you anticipate soft fruit that will be jammy or sharp. But if you expect something tasting sweet and nutty inside the crepe you’ll be nearer the mark. Anyone who likes chestnut puree or ground hazelnut paste should like this dish which is prettily served on a black platter with berries and mint.