Fines and community service for theft from Alzheimer's sufferer

33 year old Sarah Leacy, of Tildesley Road, SW15, was today, (8 December) sentenced for stealing cash over the course of the year. It is estimated that she stole £300 but only two thefts were caught on CCTV.

The victim's family reported to police on 30 June 2014 that money was repeatedly going missing from their 90-year-old mother's address at Weimar Street, SW15. The offences occurred between 13 June 2013 and 7 July 2014, and she was charged with two counts of stealing £10.

Leacy was sentenced at Wimbledon Magistrates' Court to complete 80 hours of supervised, unpaid work within the next 12 months. She will pay fines and costs totalling £700.

Mrs Flanagan's daughter Annemarie told PutneySW15.com: "I hope it acts as a deterrent for any one else who thinks thay can steal from the vulnerable. It may not be a huge punishment but hopefully she won't ever work in the profession again."

Detective Constable Steve Isom of Wandsworth CID said: "The family of the 90-year-old victim trusted Leacy with the care of their Mother who suffers with severe Alzheimers. This case demonstrates a clear abuse of that trust."

He added: "Despite two thefts being recorded on CCTV that was installed by the victim's family, Leacy has never admitted or apologised for her actions even when faced with the CCTV evidence." 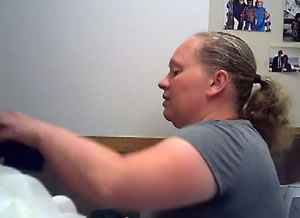 Sarah Leacy replaces the tin after stealing from it