The Met During First World War 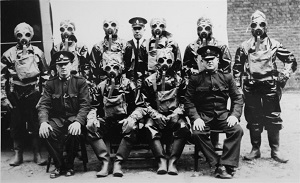 To mark the sacrifices of the Great War, the Commissioner of the Metropolitan Police Service led tributes in a ceremony held in June at the Memorial Garden, Peel Centre in Hendon. While across the organisation today, borough officers will be holding their own services to honour their fallen police comrades that took up duties to serve the war effort.

Our archived accounts show how the Met sprang into action and became the first armed force in operation for the security of Londoners and the wider country. 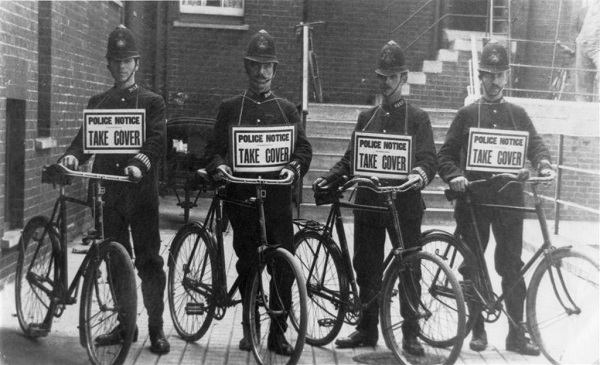 In late 1913 the Met began making preparations for what was to become one of the greatest conflicts in history. Few realised the consequences of the preparations and many believed war was inconceivable. The first archived entries held by the Met's Heritage Centre, describes officer movements in preparation for a possible war occurring two weeks after the shooting of Archduke Francis Ferdinand on 28 June 1914 in Sarajevo.

At that time the Met was responsible for policing His Majesty, George V's dockyards around the country. However as soon as war was declared they were reinforced with over 1,000 extra officers from the divisions in London which proved an enormous logistical operation. Aside from normal police duty additional police responsibilities at the dockyards included security, prevention of espionage, preventing loss from HM stores, supplementing the fire service, and the control of diseases amongst woman in the community around the dockyards.

Other premises around London that required a police presence included recruiting stations, factories making uniform and munitions factories. Lloyd George and Winston Churchill, successive Ministers of Munitions, requested uniformed women officers from the Women's Police Service to supervise women munitions workers in 1915 which paved the way for women in the police service to be given greater consideration.

Special Branch was tasked from 1913 to monitor a number of foreign agents across the country. The constant surveillance was never relaxed even though many officers involved did not know the true purpose of their observations. A dossier of suspected enemy agents was soon mapped out uncovering the espionage network of the Kaiser.

For two weeks prior to war being declared, Special Branch were put on 'constant standby', where no officer dared even to slip round to a café without informing his immediate superior of the exact spot he could be found. On the last stroke of Big Ben at midnight on 4 August 1914, Special Branch were sent into action. Within 12 hours of war being declared, officers had arrested 500 secret agents and irrevocably shattered the German espionage system in Britain.

Recorded on 5 August 1914, Police Orders describe how officers who had previously served in the Royal Navy were then re-called for duty in addition with further reservists who were called back into the army. In total 1,019 officers on the Reserve List were re-called to the 'colours'. The Met began re-calling officers who had retired on their pensions, back into active police service.

To compensate for the loss of manpower 1,200 police pensioners were recalled to duty in 1914 and 24,000 Specials were raised for the protection of vulnerable locations and other duties. With these measures as a necessity, officers were temporarily stopped from retiring from the police. The last PC to retire on pension before the war broke out retired on 1 August 1914 and was granted a pension of £60 30s 3d per year. His retirement was short as he was re-called on 6 August. It was not until 1919, when the regular Police Officers were returning from the front line, that it was possible to dispense the services of the police pensioners.

350 sergeants and constables who were experienced in drill were sent to the military as drill instructors to the new army. At the end of 1916, 19 were still on loan. In total 4,027 officers were either re-called or volunteered for the military. There would have been many more willing officer volunteers however a block on recruiting was enforced as policing In London became stretched.

Officers' families suffered financial hardship as military pay was less than police pay. Police Orders of 14 August announced a weekly allowance of 14/- paid to wives of officers recalled, plus 2/6d per child.
A few months on from August 1914 saw the first 11 officers killed in action recorded however soon the trickle of names became a flood, leaving many police widows and their children in poverty. Colleagues still working in London agreed to a hardship fund and paid a levy of 1d per week to support widows and orphans, with the first grants made on 9 October 1914. Grants between £2 and £3 were awarded to each person. In all, 360 police officers would be killed in action during the conflict.

Between 10 January 1915 and 21 August 1918, as a result of hostile air raids the Met took action on 65 occasions. The defence from aerial attacks largely remained the responsibility of the police as they went about their everyday business.

Considered as a loyal force of over 18,000 officers the Met were would be heavily relied upon to support the war effort through the many skills and attributes the organisation had and continues to hold today. Several officers could speak another language and were already used to, the rank and disciplined life that the military provides. Many officers had previously served in the military and were on reserve lists with their spirit of endurance assisted through their level of fitness which remains a standard today with 97 per cent of officers passing the annual fitness test.

The Distinguished Service Order (D.S.O.), the Military Cross (M.C.) and the Distinguished Conduct Medal (D.C.M.) were among the 337 medals, some with bars that were awarded to the Metropolitan Police Officers during the war for their gallantry.

Deputy Commissioner Craig Mackey, said: "The Metropolitan Police is proud and honoured to remember all those who fell during the First World War, including a number of police officers.

"Their sacrifice helped to shape the world we inherited from them and the freedoms we so often take for granted. We are forever in their debt."