Have your say on station locations, construction sites, ventilation shafts and more

The next step in taking forward the Crossrail 2 railway link began yesterday (October 27th) with the launch of a public consultation. TfL and Network Rail have already carried out two consultations on Crossrail 2, which have shown support for the railway from the public, businesses and others. Feedback from these has been used in the development of more detailed proposals. This consultation now seeks views on:

· Proposed station locations, entrances and exits for the tunnelled section of the route;

· Proposed locations of ventilation shafts for the tunnelled section

Crossrail 2 would serve central London through an underground tunnelled section between Wimbledon and Tottenham Hale and New Southgate, connecting with existing National Rail networks in Surrey and Hertfordshire, with the aim of increasing pressure on London's transport network. Even with the successful construction of Crossrail, and ongoing improvements to London Underground and the National Rail network, further large-scale infrastructure projects are vital to support the Capital’s unprecedented population increase, from a record 8.6 million today to 10 million people by 2030. Current proposals would see Crossrail 2 services become operational in 2030.

Factsheets, maps and further information on the scheme and the consultation are available at www.crossrail2.co.uk. An extensive series of drop-in events are being held along the length of the route as well as key National Rail stations including Waterloo and Liverpool Street between Monday 2 November and Friday 18 December, where TfL and Network Rail staff will be available to talk through the proposals and answer questions. 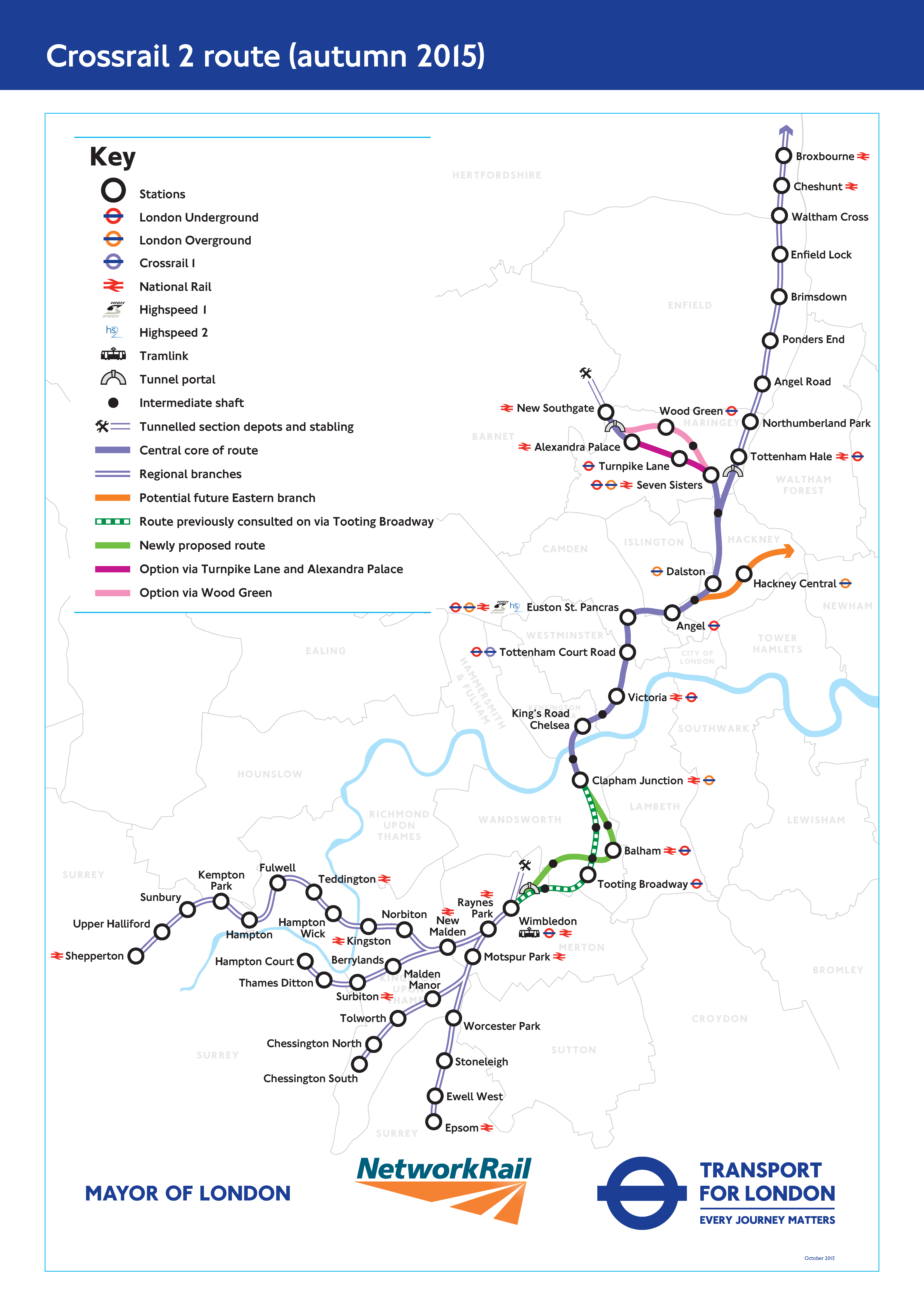 Michele Dix, TfL’s Managing Director of Crossrail 2, said, "This consultation gives people the chance to comment on where we are proposing to put station entrances, work sites and ventilation shafts needed to run Crossrail 2. As development of this vital railway continues, we will be taking on board feedback from the consultation to progress the designs for the project, so that we can open the railway by 2030.”

The new railway would provide capacity for 270,000 more people to access central London during the morning peak, with an increase in the number of trains from major destinations across south west London and Surrey including Wimbledon, New Malden, Kingston and Epsom.

Mayor of London, Boris Johnson MP, said, “Crossrail 2 will be a vital new transport link that will significantly improve capacity on the rail network into and out of London. It will also provide a major boost for jobs, new homes and economic growth here in the Capital and far beyond. Crossrail 2 is a major infrastructure project and so it's vital that we get it right from the start. This consultation is key to helping us to fine tune the proposals and to ensure that everyone with a view on Crossrail 2 can have their say and is listened to. We know that there's massive support for Crossrail 2 and there is real excitement and momentum behind our efforts to get it delivered.”

The public consultation runs until Friday 8 January 2016. There will be further consultations on Crossrail 2 as the scheme develops. The results of the consultation and the outcomes of the Crossrail 2 Growth Commission are expected in spring 2016 and will inform the submission to the Government for development consent. Subject to Government funding and approval, construction could begin in 2020 with the first Crossrail 2 service running in 2030.