Plaque to be unveiled in his memory

It’s that time of year again. As sure as exorbitant prices for strawberries and cream, excessive grunting and plucky Brits failing to reach the Second Round, the name of Fred Perry will inevitably crop up as Andy Murray carries British hopes into Wimbledon.

Just as it was for Tim Henman, it is now Murray’s annual fate to be compared to Perry. 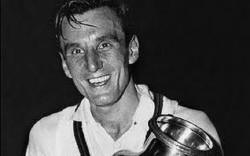 Famously, Perry was the last British player to win the Men’s Singles – and he did it three times in succession (1934-1936) in a career that also saw him crowned World Table Tennis Champion in 1929, lead Britain to victory in the Davis Cup in 1933 and become the first player to win all four Grand Slam titles, though not in the same year. And yes, later in life, he was the man who inspired the clothing brand so beloved of Northern Soul fans and skinheads!

What is seldom mentioned, however, is that Perry’s skills were acquired not at some glamorous foreign training academy, but at the rather more homely Brentham Club in Ealing. Hence this Thursday, to commemorate Ealing’s greatest sportsman (with apologies to ex- England cricketer Mike Brearley and Tottenham striker Peter Crouch, who both nurtured their skills at Brentham) the Club will be unveiling a Fred Perry Ealing Civic Society plaque outside the club entrance.

The ceremonial duties will be performed by the new Mayor of Ealing, John Gallagher, and Roger Draper, CEO of the Lawn Tennis Association. There will also be an Edwardian-style tennis tournament, with players in suitably non-revealing garb, and a performance by Questors Theatre.

Fred Perry wasn’t a native of Ealing. The family moved from Stockport to Brentham in 1918, when his father was appointed National Secretary of the Co-operative Party. Fred was nine years old and the family home became 223 Pitshanger Lane. He lived there until his marriage in 1935, and it proved a handy base for the All England Championships. ‘When I was playing Wimbledon, I would never be found at a party until the tournament was over. I was always in bed at my father’s home in Ealing by ten o’clock, with the phone off the hook so that I wouldn’t be disturbed.’

Fred attended Ealing County School and joined Ealing YMCA, where he discovered his first sporting passion, for table tennis. In 1929 he became the Men's Singles World Champion and then switched his full-time focus to the open-air game.

From his table tennis days Perry had exceptional speed and he played with the Continental grip, attacking the ball on the rise with a deadly forehand. He honed his distinctive technique at the Brentham Club, practising on the bowling green if the tennis courts weren’t free, and against the garage door at 223 Pitshanger Lane. After joining the Herga Club in Harrow and then the Chiswick Park Club, Fred swiftly rose to national prominence. In 1929, a few days after playing for Chiswick Park in the Middlesex club competition, he qualified for Wimbledon for the first time and won two matches before losing in four sets.

After his trio of Wimbledon triumphs, Perry, a natural rebel, became disillusioned by the class-conscious nature of tennis in Britain. He turned pro and moved to the USA, becoming a naturalised citizen in 1938, and in later years he returned to SW19 as a respected commentator.

In 1984 a bronze statue of Fred Perry was erected at the All England Club to mark the 50th anniversary of his first singles championship. So, it’s highly appropriate that, in its centenary year, the Brentham Club is celebrating its key role in the sporting education of the man who was – and still is – Britain’s greatest tennis player.

The unveiling of the Fred Perry plaque will be at 5.30 pm 16th June. An Edwardian tennis tournament will be held on the courts and at 8pm Questors Theatre will present A Little Patch of Land in the main hall. Everyone is welcome to attend and the barbecue and bar will be open to non-members.