Six shire horses mow the iconic symbol into the grass

The latest official Olympic Rings spectacular in the UK has been unveiled at Richmond Park, London. The Rings have been mown into the grass by the Royal Parks’ shire horses and are visible on the Heathrow flight path, ready to welcome athletes and visitors to the London 2012 Games.

The Rings which are approximately 300 meters wide and over 135 meters tall are set to be another exciting feature in London for the duration of the Olympic Games. They have been mown into the grass by six of The Royal Park’s shire horses and can be seen from the air as Richmond Park lies under the flight path of Heathrow airport.

The Rings will be maintained by two of the horses - Jim and Murdoch, who regularly cut road side verges in Richmond Park. The grass will be regularly trimmed throughout the summer and are set to become more defined over time.

Seb Coe, LOCOG Chair said: 'The Olympic Rings are an iconic symbol, inspiring athletes and uniting people around the world. To athletes they represent the culmination of thousands of hours of training and reaching the highest level in sport. These Rings will excite and inspire visitors coming to London.’

Adam Curtis, Assistant Park Manager of Richmond Park for The Royal Parks said: ‘The Royal Parks came up with the idea to create huge Rings in the grass here at Richmond and LOCOG loved it! I am so proud we‘ve been able to achieve such an effective representation of the Olympic symbol.

‘Jim and Murdoch can manoeuvre the mower around tight corners, and regularly cut the grass here at Richmond Park - they are our secret weapon because they maintain the Park without damaging the unique grassland and wildlife.’

Shire horses have been used to maintain the park for many years as they are the best tool for rolling bracken and are especially useful during the winter when the ground is soft. Horses have worked in Richmond Park since 1637 when the Park was enclosed as a royal hunting ground by King Charles First.

The Olympic Rings are one of the world’s most recognisable logos. The five rings represent the five continents and the meeting of athletes from throughout the world at the Olympic Games.

Giant sets of Olympic Rings are being installed at iconic sites across the United Kingdom to excite and inspire people ahead of the Games and to demonstrate that we are ready to welcome the world. 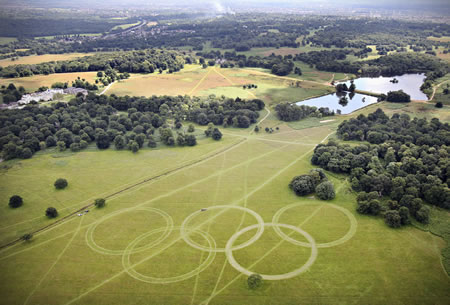