Suspect forced his way onto bus and attacked passenger

Police have released images of a man they are hunting after a teenager has been stabbed in front of other passengers on the 93 bus in South Wimbledon.

Police were called to Merton Road at about 2.40pm on Friday March 25. 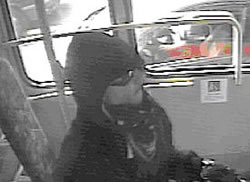 It's believed the suspect (left) chased the bus along Merton Road, before forcing his way on and stabbing the victim, who was a passenger.

The victim, in his late teens, was taken to a south London hospital. He is said to be recovering well.

Officers are treating the incident as a targeted attack. The attacker escaped from the bus and got away, police said. 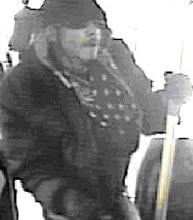 Detectives from Wimbledon CID have released two CCTV images of the suspect (the second is pictured left), and appeal for any witnesses who may not have already spoken to police to make contact as soon as possible.

DS Martin Wooodroffe said: "This kind of violent crime is totally unacceptable in Merton, and my team are exploring every lead to identify and arrest the person responsible for this attack. We treat all informatin in confidence, and I urge anyone who has any information to contact us as soon as possible."