With buyer confidence proving strong, the recently launched Brentford Lock West development in west London has seen a surge in interest, with over two thirds of its first release of homes already reserved, off plan.

Since launching in March this year, the desirable waterside development, which enjoys an enviable location alongside the banks of the Grand Union Canal, has been well received by today’s buyers, proving popular among first time buyers, downsizers and investors alike.

The first release of homes comprises a collection of 45, one, two and three bedroom apartments, all of which offer a high specification throughput along with their own outside space in the form of a large private balcony or terrace.

Katie Sully from ISIS Waterside Regeneration, said: “Since our launch earlier this year, the interest we have had, particularly from local buyers has been fantastic. We have definitely seen a renewed confidence in the market – with many buyers keen to reserve off plan to secure their perfect property. This renewed confidence, coupled with incentives such as the Government’s Help to Buy scheme, which we have available, has really helped to drive interest and to help many first time buyers in particular onto the housing ladder.”

To add to its success, earlier this month, the development was named the winner of the residential award at the annual New London Awards, which aim to recognise the capital’s very best examples of architecture, planning and development. The scheme was commended for its overall master plan and the development’s commitment to providing community spaces and encouraging outdoor living.

The first phase of the scheme, which has been designed as part of a collaboration between leading architects Duggan Morris, Karakusevic Carson and Riches Hawley Mikhail comprises a mix of 150, one, two, three and four bedroom apartments and townhouses. The homes enjoy generous outdoor spaces and flexible living accommodation and have been carefully designed to embrace a thriving waterside community.

Sully added: “Having only launched the first release of homes at Brentford Lock West earlier this year, we were delighted that the development not only got shortlisted but was selected as the winner in the residential category at the New London Awards. It has been very important to us from the outset that we deliver a scheme that really embraces its waterside location, while also remaining sympathetic to the area’s industrial heritage. It’s a great honour for our architect team to pick up this award – and we hope there will be many more to come as we develop this project over the coming years.” 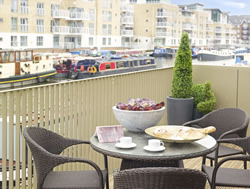 A long term commitment to the community

Brentford Lock West forms part of a five year project, which is expected to breathe new life into Brentford. In addition to providing much needed new housing, the scheme will deliver new community spaces and commercial buildings, helping to create new jobs for the area. The homes, which are being delivered by leading waterside developer ISIS Waterside Regeneration, offer buyers a unique opportunity to secure a new, highly specified home, while benefiting from a host of community features and green initiatives.

The homes, which will be built to Code Level 4 will include a range of measures designed to not only improve their energy efficiency – but will help to keep fuel costs down for residents too. Measures include district heating - which will provide a central source of heating for residents, green roofs – planted with vegetation and PV panels.

Local initiatives and organisations, such as Cultivate London – an innovative, urban farm which aims to increase the amount of locally and organically grown produce available across London, are also playing a big part in the scheme’s development. Cultivate London is already located on site and plans to include community allotments have been factored into the design. Close partnerships with other local organisations including Brentford FC Community Sports Trust, Active 360 and canoe club Edge have also been developed and the scheme will host a new watersports hub, to be enjoyed by the whole community.

As part of the scheme, ISIS will also be carrying out a number of works to improve the local waterways – including the widening of the existing towpath, the addition of new visitor mooring and hook up points and the installation of a new floating pontoon to be used by the local canoe club.

The overall scheme, which will be delivered over the next five years, will comprise 520 residential homes, 20% of which will be affordable. The scheme will also deliver 7,000 square metres of commercial space, helping to create around 300 new jobs for the area. £2 million has been allocated for investment into local health and education facilities.

The first of the homes to be released comprise a mix of one, two and three bedroom apartments, with prices starting from £284,950. Help to Buy is available on the scheme. The Sales and Marketing Suite is open daily, 10am - 5pm. Off plan reservations are now being taken. For more information or to book an appointment call the Brentford Lock West sales team at Stubbings Property Marketing on 020 8569 7449, email brentfordlockwest@stubbingsltd.co.uk or visit www.brentfordlockwest.co.uk 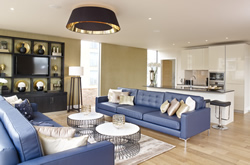